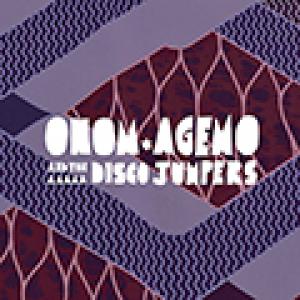 If you thought Onom Agemo was the name of an obscure afrobeat legend, you'd be sorely mistaking, because behind Onom Agemo And The Disco Jumpers hides a German Berlin based quartet (and maybe also try reading Onom Agemo backwards, that might help a little). The band is centered around saxophonist Johannes Schleiermacher and 'Liquid Love', the Onom Agemo And The Disco Jumpers' second album, is the logical sequel to 2015's 'Cranes And Carpets' (even in the cover design of both albums, the band opted for some continuity). Grasping Onom Agemo And The Disco Jumpers' sound in a few words is not easy, but it definitely sounds groovy as hell. On 'Liquid Love', among other things, we heard influences from Ethio-jazz ('Opus'), afro-funk ('Weird Panda King', 'The Disco Jumpers'), free jazz, psychedelia, krautrock and Moroccan gnawa ('Kurifuna'). The album closes with the four-part composition 'Somebody', in which the voices of Maria Schneider, Natalie Grefel and Olga Xavier can also be heard. Catchy German weirdness!