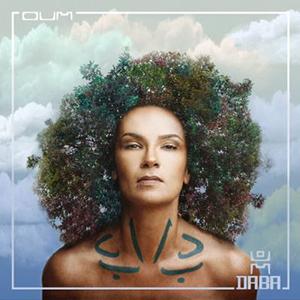 Yours truly got to know Moroccan revelation Oum, born Oum el Ghaït Benessahraoui, in 2015 thanks to 'Zarabi', her second album. On successor 'Daba', the singer proves she has clearly matured and takes her mix of Arab and Berber influences with elements from soul and jazz to the next level. For 'Daba', Oum travelled to Berlin (a strong contrast with 'Zarabi' which was recorded in M'hamid El Ghizlane, a Moroccan village on the edge of the Sahara), and joined forces with Palestinian poet, singer and oud-player Kamilya Jubran, who,  for the first time, also introduced some electronic influences into Oum's music. The result is an album with one leg in the Arabian-Moroccan tradition and past and the other firmly in the present, so the fact album title 'Daba' translates as "now" is certainly no coincidence. In the songs on 'Daba', between atmospheric and danceable, Oum sometimes goes poetic-ecological ('Chajra' or "tree", an ode to nature, 'Ha', "here is...", a monologue of the earth addressed to its inhabitants, or 'Yahbar', "ocean", a supplication to the comforting seas which in their elusiveness offer the promise of oblivion and peace) and elsewhere broaches the harsh worldly reality ('Laji', "migrant", and 'Temma', "over there", tell of the fate of the displaced, their dreams and sufferings, and 'Kemmy', "you", is a feminist statement in which the singer offers words of support and sympathy to the countless women who are still burdened with the rules imposed by the patriarchy). With 'Daba', Oum confirms her status as one of the most intriguing Maghrebi artists of her generation!