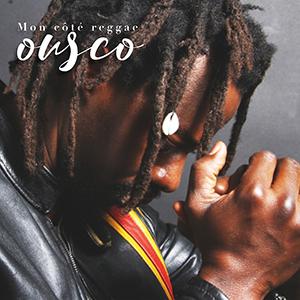 Ousco Cisse, originating from Diabaly in northern Mali, started his musical career back in 1996 when, together with three friends, he formed SMOD (an acronym of the first letters of the band members' first names: Sam, Mouzy, Donsky and Ousco). 'SMOD', the band's third album, a mix of hip-hop and traditional Malian music, was produced by Manu Chao, who around that same time had also turned out Amadou & Mariam's 'Dimanche À Bamako', and 'Ma Jolie' is definitely reminiscent of that sound. Meanwhile, Ousco has been going at it solo for several years now, and for 'Mon Côté Reggae' he recorded in Paris (Gum Records), but, among others, also in Bamako (Humble Ark) and Brighton (Prince Fatty). Opener 'Mame Cheick N'Diaye', a reference to Ousco's affinity with the Baye Fall movement (see also closing track 'Allah'), is an up-tempo party starter. In a similar vein are 'Zoum Zoum Zawé', a title that means something in any language, but with which Ousco proves that music is a universal given, and 'Fana Fana', an indictment of the divide and conquer tactics of the capitalist system. In the rather intimate 'Consomer National', he calls on consumers to focus on local products instead of depending on expensive import, a message not entirely alien to European ears either (the video accompanying the song, featuring Belgian actress Isabelle de Hertogh, was directed by Jeanne Hurt). 'CDEAO' stands for Communauté Economique des Etats de l'Afrique de l'Ouest (or the Economic Community of West African States), and in this acoustic track, Ousco warns the West African nations for the consequences of global warming. 'Mali' is more than a tribute to his home country, because for some time now Mali is faced with separatist factions trying to push their agenda, and with Marcus Garvey's words: "One God, one aim, one destiny!" in mind, Ousco calls on his countrymen to unite for the preservation of the nation. The fact Ouscou is not blind to the other gender,  is evident from 'Les Femmes', an ode to women, and the aforementioned 'Ma Jolie'. 'Mon Côté Reggae', a mix of reggae with elements from Malian music, played on traditional Malian instruments, has a sound that is comparable to that of Tiken Jah Fakoly, who in Ousco has also found a serious competitor. Mere weeks after Salim Jah Peter's 'Nature' yet another African smasher!