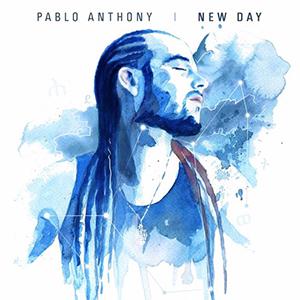 Pablo Anthony, it could have been the name of a Jamaican reggae veteran, but turns out to be the alter ego of Pablo Antonio, a young lion of French-Chilean descent hailing from the outskirts of Paris. Thanks to his older brothers, Pablo was already introduced to the early French sound system scene at quite an early age and in 2004, together with a number of his friends, he founded the twelve-piece Vagasound Family, a big band like formation of which three members still play in Pablo's current backing band Small Axe Band. In 2010 Anthony linked up with Obidaya and Natural I members Don Obidaya and Elies Ene, leading to the foundation of the Natural Prod' label and the formation of acoustic trio IBY (Irie Blessed Youth). Additionally Anthony also starts focusing on a solo career and in 2012 presents his first EP, 'Black Soul', for which he collaborates with Fab Wize. And now there's 'New Day'. For this album Pablo was backed by the aforementioned Small Axe Band (Hugo Sarton - drums, Lucas Veillet - bass, Martin Grenier - guitar, Jean-Baptiste Gentil - keys, Alexandre Perrout - keys, Indy Eka - backing vocals, Nayeli - backing vocals). Opener and title track 'New Day', with a really shady sounding poppy intro, still had us doubting a little, but songs like 'Jah Will Never Let Us Down', 'Chant' (of which the nyahbinghi percussion sounds even better in the dub version), the soulful lovers tune 'I Really Love You' or ganja-tune 'Highest Meditation', removed all further doubt. For 'New Day' Pablo also invited a number of guests: 'Real Friends', a combination with Lyricson sounded just a tad too corny to our taste, but on the other hand 'Ruff Time' featuring Ilements and 'U. N.I.T.Y.' featuring King Lorenzo, could effortlessly convince us. The album concludes with three excellent dubs. Rock-solid new roots release!