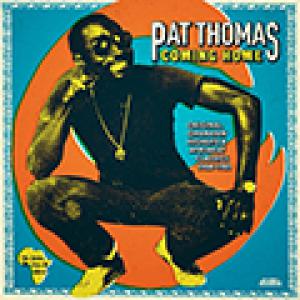 Just as after the release of 'Love And Death', Strut Records released the Ebo Taylor retrospective 'Life Stories: Highlife & Afrobeat Classics 1973-1980', the label is now doing the same for "The Golden Voice of Africa": Pat Thomas. The double compilation album 'Coming Home: Original Ghanaian Highlife & Afrobeat Classics 1967-1981' (or three-part LP version, if you prefer the vinyl version), documents Thomas' career from the early days sometime in the second half of the nineteen sixties, when, together with Ebo Taylor, he was a member of Broadway Dance Band, over later work with bands like Blue Monks or the Ghana Cocoa Marketing Board sponsored Sweet Beans, to his period in Berlin, where Pat exiled himself after the coup by Jerry Rawlings in 1979 and where he was part of what's become known as the burger highlife movement (Ghanaian expatriates in Germany named themselves "burgers"). You shouldn't just expect highlife and afrobeat on 'Coming Home' though, because throughout the years Thomas also experimented with reggae ('Revolution', clearly inspired by the sound of Jimmy Cliff), soul ('Brain Washing', 'Can't You See') and disco ('Who's Free', 'Yamona'). Vintage African niceness!