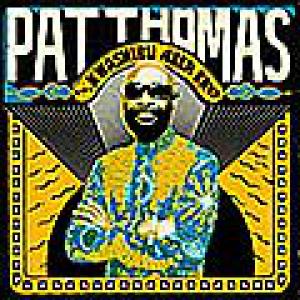 Judging from the cover photo of 'Pat Thomas & Kwashibu Area Band', Pat Thomas could have been Isaac Hayes' African twin, but with Hayes' southern soul music, the music of this Ghanaian has nothing in common. In his native Ghana Pat Thomas is nothing less than a highlife legend, referred to as "the golden voice of Africa". For this self-titled album Thomas not only assembled five piece band Kwashibu Area Band, but he also persuaded veterans like Ebo Taylor (the two shared a musical past in bands like Sweet Beans, Broadway Dance Band or Stargazers), Tony Allen, Osei Tutu (trumpeter with Hedzoleh Sounds) and bassist Ralph Karikari (The Noble Kings) to lend a hand. The track list of 'Pat Thomas & Kwashibu Area Band' is a mix of reworked Thomas classics ('Odo Adaada', 'Gyae Su', 'Mewo Akoma') and new songs. By using only analogue equipment for the recording of the album, Kwashibu Area Band saxophonist Ben Abarbanel-Wolff, wanted to give Thomas' songs a vintage 1970s vibe, and the album's cover illustration, the work of Lewis Heriz, also refers back to that same era. Excellent tribute to the golden years of highlife, with any luck earning Pat Thomas the international recognition he deserves.