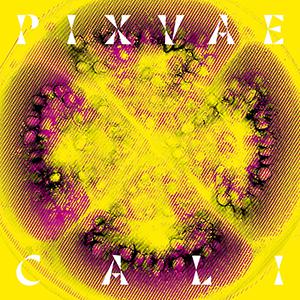 Yours truly got to know Colombian-French combo Pixvae, composed of members of French math rock formation Kouma and Colombian Bambazu, specialized in traditional music from the Pacific region of Colombia, in 2016 thanks to their self-titled debut which featured Colombian currulao rhythms clashing with jazzcore. Both musically and visually 'Cali' is the logical sequel to that first album. If the cover of the previous album still contained the peach palm, after which the band was named, then this time the album sleeve features a stylized picture of a truss of palm peaches. The title of the album refers to the city of the same name in the southwest of Colombia, the region where both currulao and salsa enjoy great popularity. 'Cali' sounds a lot less rock-flavored than debut 'Pixvae', but in eight long songs the band slowly but surely gets the listener into a wonderful trance yet again!