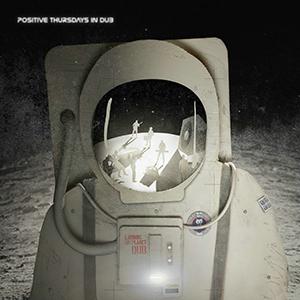 Positive Thursdays In DUB is a musical project around Polish radio maker, DJ and musician Rafal Konert. Positive Thursdays started out as a weekly radio show on Student Radio Bit at the University of Lower Silesia in Wroclaw back in 2005, then still called Positive Wednesdays. When the show moved to local station Radio LUZ in 2006, the broadcasting day changed and it was renamed Positive Thursdays. In 2011, presenter Rafal Konert decided to expand his radio program with a live component, first a DJ-act, but in the meantime grown into the eight-piece Positive Thursdays In DUB. In 2015 there was already the autobiographical documentary 'Rocking In Babylon', a collaboration with Ghetto Priest, now finally followed by a first full-fledged long-player 'Landing On Planet DUB'. The album opens with 'Knowledge', a song for which Rafal used samples from the numerous radio interviews he did in recent years, featuring, among others, the voices of Brother Samuel Clayton (Mystic Revelation of Rastafari), Niney The Observer, Mad Professor, Danman (Iration Steppas), Vaughn Benjamin, Addis Pablo, Alpha Steppa, Lee 'Scratch' Perry and Style Scott (Dub Syndicate). After that "intro" we head straight into space for the ambient-dub of the 8 minute plus 'Rising', for which Rafal used fragments of voice processed recordings from astronauts. 'Turbulence' sounds a lot firmer featuring delicious jazzy saxophone solos by Robert Kamalski and trumpeter Sebastian Pachecki. A real ambient soundscape is the short interlude 'Song Of The Earth'. 'Amazing Space', starring the trombone of Tomek Kasiukiewicz, is another jazz meets ambient-dub gem that spontaneously reminded us of the work of Rico Rodriguez. That was also the case with 'Dub Wars', a song for which Positive Thursdays In DUB drew inspiration from the soundtrack of the Star Wars saga, something Rodriguez already did with 'Ska Wars'. 'Damage' is another short soundscape, and the album concludes with a safe landing at our destination title track 'Landing On Planet DUB', lasting just under ten minutes and for which all the musicians pull out all the stops one last time. Extremely enjoyable space adventure by this Polish live dub crew.