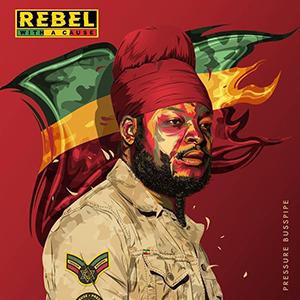 Five years after the well-received 'The Sound', Pressure Busspipe and I Grade's Laurent 'Tippy I' Alfred took back to the studio for 'Rebel With A Cause'. What immediately stands out about this album are the multitude of guests the duo invited and the fact that a large part of the tracks got a hip-hop vibe. Where those guests are concerned, the duet with Sizzla, who once again whips out his "false-setto" again in 'War Is Ugly', couldn't convince us, but the combinations with Reemah ('Burn Down'), Kabaka Pyramid and Jah9 (who pop up in a remix of 'Lion Is A Lion', a song Pressure already recorded solo back in 2016) are very strong, and 'Peace And Love' with Anthony B can also absolutely convince (even though it sounds a tad as if Pressure was invited by Anthony B instead of the other way around). After the sudden demise of Virgin Islands reggae legend Vaughn Benjamin, 'The System' - dating back to 2015 - suddenly turns into something quite magical, and Pressure dedicated the entire album to his good friend and colleague. We had to get used to the hip-hop vibes on 'Rebel With A Cause', but Pressure proves it is certainly not a gimmick by inviting American veteran Redman for the title track. For 'Jah Is Real', a duet with Protoje, Busspipe and Tippy I event went r&b. However, our personal favorite from the track list is opener 'King Selassie First', an excellent ode to His Imperial Majesty. Second bullseye for Pressure Busspipe and 'Tippy I' Alfred!