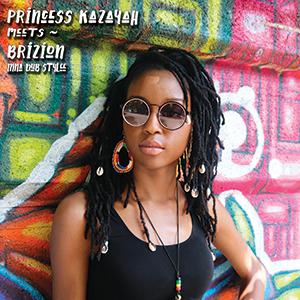 Introducing: Princess Kazayah (real name Shanelle Mitchell), an American of Jamaican descent from Evanston near Chicago, with 'Princess Kazayah meets BriZion Inna Dub Stylee' presenting her debut EP. As the title suggests, Kazayah collaborated with San Diego-based dub producer BriZion, who provided the three vocal cuts on the EP with delicious dub counterparts. Opener 'Incient Of Dayz' is an excellent ode to the Most High, with 'Can't Run Away' Princess Kazayah reminds us that whatever happens, you'll always be confronted with yourself and the consequences of your actions, and with 'Feel The Vybz' the singer recorded her very first love tune, and with success. New female talent to keep an eye on!