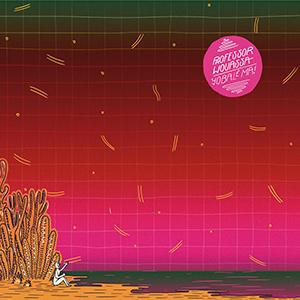 Yours truly got acquainted with Swiss band Professor Wouassa in 2017 thanks to 'Grow Yes Yes!', their first release for the Matasuna Records label. On that album, the eleven-piece band from Lausanne served a highly catchy mix of afrobeat and highlife, and successor 'Yobale Ma!' (Wolof for "take me!" or "grab me!") certainly sounds no different.

Professor Wouassa's most striking ingredients are still the alternation between the male voice of Mamadou 'Jim' Diagne and the female charms of singer Thaïs Diarra, with the fact that in this band the traditional Pidgin English is often replaced by Wolof and Bambara. But on 'Yobale Ma!' the band also dares to step outside well-trodden highlife- and afrobeat paths. Thus the almost 9 minutes long 'Fallou Fall' opens the album in true jazzy big band style and soon switches to solid afrobeat and ends with some Senegalese sabar percussion. For title track 'Yobale Ma!' the, according to their own words, Swiss drew inspiration from the guitar skills of Nile Rodgers, and tracks like 'Djongoma' and 'Sama Yone' are clearly influenced by rhythms from the Caribbean.

We get a piece of "forgotten" African history with 'Thiaroye Gare', an ode to the so-called "tirailleurs sénégalais" or Senegalese Tirailleurs, a corps of Senegalese infantrymen in the French army who, during the Battle of France, served with distinction at Gien, Bourges and Buzancais, and saw extensive service in West Africa, Italy and Corsica during 1944, as well as in the liberation of southern France. After the Liberation of France, the Tirailleurs concluded their service in Europe, being replaced with newly recruited French volunteers on the order of Charles de Gaulle; a process known as "blanchiment". The complicated process of discharge and repatriation of the Tirailleurs, coupled with the hardships faced by the soldiers in the winter of 1944 - 1945, led to several incidents of violence, most notably the Thiaroye massacre in 1944, a revolt that was bloodily crushed by the French colonial rulers and in which numerous Senegalese soldiers lost their lives.

For the highlife chords in 'Iba Niawoulo', just as suddenly switching to a rhythm & blues vibe accompanied by afro-guitars, Professor Wouassa drew on Serge Gainsbourg's 'Initials B.B.' for inspiration, and the Swiss conclude with the ten-minute 'Djougoudja', Ethio-jazz meets Afro-funk, in which Mamadou, in true poetry-slam style, pays homage to Cheikh Amadou Bamba aka Serigne Touba, founder and spiritual leader of the Senegalese Mouride brotherhood.