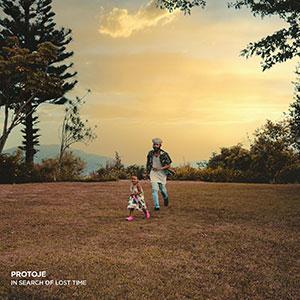 With the title of his new long-player Protoje simultaneously creates a link with predecessor 'A Matter Of Time' and pays homage to the work of French author Marcel Proust, who between 1908 and 1922 wrote the cycle of novels 'À La Recherche Du Temps Perdu'.

For faithful fans of Protoje's work, 'In Search Of Lost Time' will undoubtedly sound like the logical sequel to predecessors like 'Ancient Future' and the aforementioned 'A Matter Of Time', but for true reggae purists this album might be just a bridge too far.

Winta James, Protoje's right hand on previous albums, is once again on call, but this time is also assisted by colleagues like Ziah, Supa Dups, The Grei Show, Iotosh Poyser and Stephen 'Di Genius' McGregor. Four of the ten tracks on 'In Search Of Lost Time' are duets.

For opener 'Switch It Up', a song in which he states that in order to remain relevant,  an artist has to reinvent himself almost on a daily basis ("Dem say dem love we but a yesterday, get what dem want and switch it up already..."), Protoje joined forces with Koffee (and in the background Lila Iké, Sevana, Jaz Elise, Royal Blu, Chronixx, Iotosh Poyser, JLL, Ziah and Winta James can also be heard), 'A Vibe' is a hip-hop ganja tune for which Protoje collaborated with American rapper Whiz Khalifa, with his label buddy Lila Iké, Protoje recorded the love tune 'In Bloom', and finally there's 'Like Royalty', in which Protoje, together with Popcaan, pays a very personal tribute to all the people who aided him in getting where he is today (nicely underlined by the successful video by Storm Saulter):

Me used to sleep pon Stagga couch (yeah)
Me used to sleep pon Cory couch
Dem man deh never left me out (no)
Me used to live at Eddie house
Me never keep me own key
Shikima used to let me out (true story)
Bring him with me go L.A.
Is like him get nominated, watch di Grammy's side ah me (oh)
Cause how many people can you say
Would feed you when you hungry?
When you broke dem bless you with money
But I have been so fortunate
Surrounded by so many people, make sure say me copacetic
Ah dem thing me cyan forget

Mommy put her money where her mouth deh
Empty bank account support me talent, oh yeah
Everything me have; you get it time thousand
How me fi repay, no amount of money won't spend

If I ever make it in life
You a go be living like royalty
So me haffi set di thing right
Never eva haffi think twice, no way

Just like on his previous albums, Protoje brings a salute to some musical heroes of the past. The aforementioned opener 'Switch It Up' is supposed to be based on Papa Levi's 1984 hit 'Mi God Mi King' (even though we honestly had trouble hearing any resemblance at all), but for closing track 'Strange Happenings' he clearly borrowed from Papa San's 'Strange'. Even more than musically, this time Protoje touched us with his personal and on point lyrics, like in 'Deliverance', about the sacrifices he had to make for his musical career:

I see this life I living, I look pon it like: "Oh My!"
Time Fly, yow ten years, drop arguments in '09
Fly my family the Grammy, oh God, them member me trying
That's a part of me I cannot delete, keep that shit in my mind
I was sitting outside the studio waiting just to get voiced
Them would send me home, come back every day, never even think twice
That was me in 2008 you see; nobody ever did a fly the gate for me
These the things I been thinking of, please nuh bring no damn feelings up
Love my dad, I don't see him enough, we had reasonings while steaming up
Whether famine or feast the same, see the sun, you going to see the rain
Throughout all of this we remain

Or 'Self Defense', in which he talks about the spiral of violence holding Jamaica in its grips, pleads for self-defense, rejects the finger-pointing of genres like dancehall and trap, and firmly speaks out against gender related violence:

Place a move strange, watch how you walk to me
Look inna me face when you talk to me
Hands pon me waist, might haffi draw fi me
Because me nah sit and wait pon the law

The place moving hot right ya now, way it hot right now
Where the Glock fire shot 'round the clock
You can't turn back hands of time fi reverse hollow point
Wah them plot make you drop off the map
So youths be wise, hear they blaming the music
They say that it's rooted in dancehall or trap
Well if that's the case then what's the excuse you will use
When good youths get shot by the cops?

And any man weh a prey pon woman, them fi get line up make we shoot the target
How much haffi bleed, a how much woman haffi dead
Before you see say something sick inna dem man dem head?
You think you own you woman; thing say a you property
You and you dutty bredrin dem keep up atrocity
When we retaliate, wa nah ge need apology
We sisters under attack, this is a calamity
Me hear some man a say them rather rape than turn a gay
As if the thing deh related in any way
You nah see say a some sicko them mentality?
The patriarchy propagate all of them fallacy!

The message from the album's title can be found a last time in closing track 'Strange Happenings', in which Protoje shows himself from his most vulnerable side:

When I was just a young boy, maybe like seventeen
I would talk to my father, told him about my dreams
And often he would tell me: "Don't rush to be a man!"
I heard the words that he spoke, but could not understand
Cause to me life was easy, it was just fun and games
Until I saw that people were filled with so much pain
It's harder to share sometimes, easier to pretend
The way we treat each other, I just don't comprehend
ILast nigh I heard a story, too crazy to be true
I wouldn't dare repeat it, what are we gonna do
And as we figure it out, the time just slips away
Don't worry 'bout tomorrow, just be glad you've got today

With 'In Search Of Lost Time', Protoje once again proves to be a gifted wordsmith, continues to surround himself with top talent and once again delivers a gem of an album that gets better every time you listen to it!