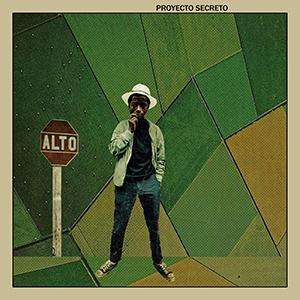 With a band name like Proyecto Secreto of course you always run the risk of staying under the radar, but in all honesty, yours truly wasn't involved in music journalism yet back in 2003, so the release of their debut album 'Bruce Lee Is Back' completely passed us by.

A whopping seventeen (!) years later the Ghent based formation returns with 'Alto', joining forces with Dave Hillyard (saxophonist with The Slackers, Stubborn All-Stars and bandleader of his own David Hillyard & The Rocksteady Seven) who produced the album, his band mate with The Slackers and Stubborn All-Stars Vic Ruggiero (who can be heard in 'Guilty', the only vocal track in the track list) and Victor Rice who, together with Hillyard, took care of the mix.

'Alto' opens with 'Tainee', a ska adaptation of a Taiwanese traditional which has the quality of a Skatalites production! Cut from the same cloth is the delicious 'Jamaica 69', in which you can hear a fragment of the Mexican evergreen 'Besame Mucho', but the jazzy 'Ethiopian Gipsy', thanks to the complex horn parts, clearly draws on Ethio-jazz, and with 'Rocksteady Nr1' we're served an excellent piece of instrumental rocksteady.

The album also contains three musical tributes: 'Dance Obama', a clear nod to the Prince Buster classic 'Dance Cleopatra' and a salute to American ex-president Barack Obama featuring excellent keyboard arrangements by Michael De Schrijver, 'Mariskal', a tribute to the Spanish journalist, producer and radio announcer Vicente 'Mariskal' Romero featuring excellent solos by guitarist Eduardo Vega and trombonist Andrés Fernández, and finally with 'Tribute To Ruigoord', in which the flute of Tom Callens plays a leading role, Proyecto Secreto pays homage to Ruigoord, a village in the Houtrakpolder in the municipality of Amsterdam, which was occupied by squatters in July 24, 1973, now known as an artists' colony and in the past also serving as the location for the Future Reggae Ruigoord festival, where Proyecto Secreto's passing didn't go unnoticed.

The track list ends with 'Stop Drinking', probably not entirely coincidentally followed by 'Green Cake Dub', after 'Mike Tyson Dub', the second excellent dub on 'Alto', and a nice indication where Projecto Secreto's preference lies when it comes to mind-altering substances.

'Alto' ("Stop!") was released just after the COVID-19 measures were introduced; now giving the album title an almost prophetic vibe, as if Proyecto Secreto already knew everything would be coming to a standstill. Hopefully we'll once again see this excellent ska-, dub- and rocksteady combo excel on stage somewhere soon!