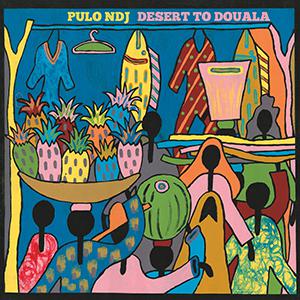 Chad is one of those African states which musically have remained a largely blind spot on the world music map, but Pulo NDJ now wants to change that. The adventure of this six-piece band began in May of last year, when New York DJ Nickodemus travelled to the Chadian capital of N'Djamena at the invitation of HAPE Collective (a platform that encouraging cultural exchange through groundbreaking musical encounters) to teach DJ techniques and electronic music production to a group of talented young adults from Chad, Cameroon, Togo and Congo. The group eventually took to a pop-up studio put together by Josué Buosi aka djbuosis and Nickodemus, and the result is this 11 track 'Desert To Douala'. Both the music on this album and the title of the album form a cross section from the north of Chad to the coast of Cameroon and the musical genres you encounter along the way, with in the arid desert-like north of Chad mainly nomadic shepherds making music on handmade instruments like the garaya, a traditional Fulbe lute (see opener 'Cera Cera' or 'Dabadji Am Alcorama'), and in the tropical south a sound driven by hypnotic percussion rhythms on balafon and tam-tam ('Mbaoundaye' and 'Bazaka', reminiscent of Crammed Discs' Congotronics releases) in which influences from Cameroon and Congo are often incorporated ('Sanga' is a song that floats on popular rhythms used during Cameroonian wedding ceremonies mixed with soukous and Congolese rumba). And then there's N'Djamena, the Chadian capital, a melting pot of cultures where influences from Togo ('Kewolea') and Nigeria (the afrobeat influences in 'Taroum') are also part of the local music scene. Add to that some hip-hop ('Un Jour', a collaboration with MC FTP over a garaya loop, in which the rapper denounces Chadian skin-color-based class society, or the infectious 'Clandoman', an ode to the ubiquitous moto-taxi drivers, featuring that same MC FTP) and electro and you get Pulo NDJ. Fascinating introduction to Chadian music culture in all its facets.