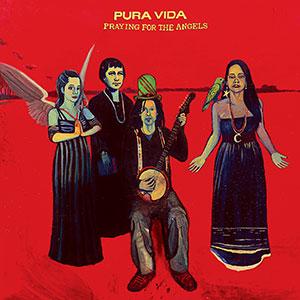 With the release of each new album, Pura Vida seems to venture more and more outside the boundaries of reggae and dub, and that's certainly true on 'Praying For The Angels'. It already starts with the artwork used for the cover image - once again the work of Bregt 'Puraman' De Boever - portraying the artist next to vocalists Alessandra De Qiueiroz, Nina 'Vitalia' Schelfhout (Bregt's other half) and his beloved grandmother Mathilda Spruytte. Stylistically, the painting seems to be influenced by the symbolism of the end of the nineteenth century, thus being more reminiscent a nu-folk rather than a reggae album cover.

Simply describing 'Praying For The Angels' as a reggae album, would be selling it short. The album opens with the aptly titled 'Heart Of The Last Ark', a great dubby track in which Puraman immediately exposes the musical soul of Pura Vida. Very different in tone and form is 'Crawling', with Puraman's giving his voice an almost Leonard Cohen-like vibe (see also closing track 'Learn To Go'). Even though Bregt is a big fan of Bob Dylan, 'Ode To Bob' is a tribute to the king of reggae, so why not invite Wailers bassist Aston 'Family Man' Barrett and his son, drummer Aston Barrett Junior? For 'Right Time Come', sounding like a lost recording from Lee Perry's Black Ark studio, is also pure reggae, but love tune 'Les Eaux Sauvages' invites the listener into the world of French chanson thanks to the vocal contribution of Nina 'Vitalia' Schelfhout.

Then it's off to Brazil for 'O Sopro De Inae' ("the breath of Inae"), an ode to Inae or Yemaya, the orisha of rivers and oceans in Brazilian candomblé. Alessandra's voice still sounds fragile in 'O Sopro De Inae', but she pulls out all the stops for 'Find A Way Home', in which her bluesy voice evokes memories of that of singer-songwriter and enfant terrible Janis Joplin. In title track 'Praying For The Angels', somewhat reminiscent of Jethro Tull, the progressive rock band around front man Ian Anderson, Alessandra is featured a last time.

No Pura Vida record is complete without at least one Congo present, and for 'Blessings From The Lost Ark' even managed to tempt Ashanti Roy, Watty Burnett and Kenroy Fyffe into the studio. 'Ancestor Spirit Dance' features strong afrobeat influences and Puraman used samples of the voice of his late grandmother Mathilde Spruytte, immediately giving the song title a very literal meaning. For those who buy the vinyl version of the album, this is also the last track on the album, but the digital download still features 'Tropical Storm', americana with excellent keyboards by Puraman, and finally the aforementioned 'Learn To Go'.

Not for purists, but yet another small masterpiece by this Belgian band surely deserving of more attention from outside the reggae circuit as well!