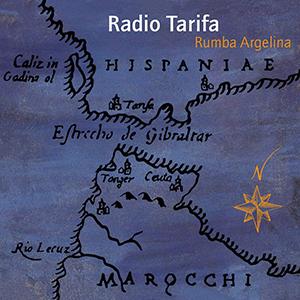 Next on the list of re-releases by World Circuit Records is 'Rumba Argelina', the 1993 long-player debut of Spanish band Radio Tarifa. The band was founded by Fain Sanchez Dueñas (darbuka, plato, backing vocals), Vincent Molino (ney, horn and oboe) and Benjamin Escoriza (vocals) in the early nineteen nineties and mixed flamenco with Arabo-Andalusian music, Arabian and Moorish influences and elements from the rest of the region surrounding the Mediterranean and even from the Caribbean. Fain himself summarized it as follows: "It's a case of utilizing the mix of cultures that lie side by side in Spain, like the buildings in old cities such as Toledo: Arabic, Jewish and Christian. It's those inter-relationships we explore. When we got together, we all had different day-jobs: I was an architect, Vincent worked as a geological engineer on subterranean water in Seville, and Benjamín worked in TV admin. Music was our passion occupying every other moment. Vincent and I met at Ars Antiqua (Musicalis) which was an early-music ensemble playing music from France, Italy, Spain, and even England, from the 12th to 15th centuries. Of course, we were playing rock and flamenco and other things too and that's how we knew Benjamin. He was from the world of Andalucian popular music. He was a singer of the lighter "palos" of flamenco, like bulerías and particularly rumbas and tangos. Almost all our music is modal, which means it is totally melody based. Modal means it's not chromatic, so it doesn't use all the black and white notes of the piano like classical European scales, and the scales do not necessarily have seven note patterns either. We play like an ensemble, listening hard to each other, with lots of eye contact all the time on stage so we dovetail in and out of each other.".

'Rumba Argelina' was recorded on an eight-track recorder in Fain's bedroom with a minimum of resources. However, to the amazement of the band members, the resulting album quickly grew into a cult success and put Radio Tarifa on the map as an innovator in the world music scene. It's no coincidence that the band's name refers to Tarifa, a small town on the southernmost tip of the Iberian Peninsula, where Spain almost touches the African continent and where you can easily receive the local radios that broadcast on the other side of the Strait of Gibraltar. 'Rumba Argelina' was followed by 'Temporal' in 1996, 'Cruzando El Rio' in 2000, and the live album 'Fiebre' in 2003, but in 2006 the band called it quits and a reunion is not immediately in the stars as vocalist Benjamin Escorizo passed away in 2012 after a long illness. Spanish gem to cherish!