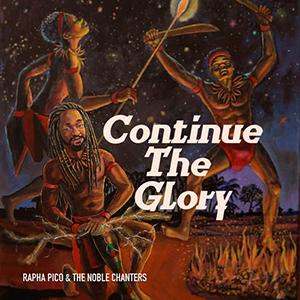 After the release of 'Get Ready' Rapha had become disenchanted with what he described as: "...a fast-food production way of making music", and decided to retreat to the jungle of Costa Rica to re-energize (see also 'Feel No Pain', his contribution on Bobby Hustle's 'Wolaba Vibes: The Costa Rica Sessions' EP from that same period). However, the beautiful natural surroundings made his musical inspiration return and Rapha soon started penning one song after another.

Once back in Holland he surrounded himself with the cream of Dutch reggae musicians and booked 10 hours of recording time at the Earth Works Studio in Amsterdam (where in 2019 he'd also recorded his 'Lead The Way' single, picked up by Jah Shaka) and the result is this 6 track 'Continue The Glory' EP.

With the title track Rapha pays homage to the ancestors and the African continent, but the most striking tracks in terms of content are undoubtedly 'Lion Story', for which Rapha Pico drew inspiration from the old Zimbabwean saying: "Untill the lion tells his story, the hunter will always get the glory!", interpreting it as: "Official history silenced the voices of those that we conquered and yet, despite all off their efforts to wipe them from earth, rebels with a cause continue to emerge to such a level that they have to be considered a force to be reckoned with!", and 'Stand For Something', with the thought provoking chorus: "If you don't stand for something, you'll fall for anything!"; two songs certainly offering food for thought in the light of the recent Black Lives Matter protests.  After five excellent roots tracks Rapha Pico perhaps somewhat surprisingly concludes with 'Til The End Of Time', an equally perfect sounding love tune. True gem of a roots-EP!