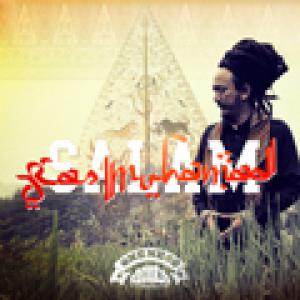 Ras Muhamad (born Muhamad Egar) is Indonesia's self-proclaimed reggae ambassador. Although this Moritz 'Morry' von Korff (Oneness Records, Germany) produced album was our first encounter with Ras Muhamad, 'Salam' ("peace") is already his fifth long player. On 'Salam' Muhamad fluently alternates between English, Jamaican patois and Indonesian or Bahasa Indonesia (literally "the language of Indonesia") and, apart from genres like reggae and rocksteady, also draws inspiration from jazz, metal and world music, earning him collaborations with Indonesian pop idols like Glenn Freddly, Tompi and Element, and the respected Indonesian jazz musician Indra Lesmana. On 'Salam' he adds Kabaka Pyramid and Naptali ('Farmerman' over the Reggaeville riddim) and German artists Sara Lugo and Uwe Kaa to that list. Content-wise 'Salam' is far from uninteresting as well: in 'Lion Roar' (African Children riddim) he compares the cultural similarities of the lion symbols used in Africa, Asia and Europe, and 'Through The Smoke' talks about the police violence Ras Muhamad was confronted with when he launched his book 'Negeri Pelangi' ("rainbow country") in 2013. Of course it are mostly the tracks with an Indonesian vibe ('Salam', 'Satu Rasa', Ras Muhamad's take on one love and 'Lelukur', a song about his ancestors, for which he got the help of compatriot Bishmo Kunokini) that set this album apart, but the rest of the track list could also convince yours truly. Discovery!