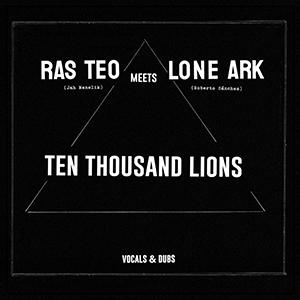 Ras Teo (real name Teo Hartoonian) is a reggae artist from Los Angeles who grew up in Sweden. Over the years he's collaborated with heavyweights from the scene like Yami Bolo, Pablo Gad, Sizzla, Prince Alla and Fred Locks. For 'Ten Thousand Lions' Teo joined forces with Spanish producer and multi-instrumentalist Roberto Sanchez for a magnum opus consisting of twelve vocal cuts and as many dubs (available as double-LP or digital download). Ras Teo may be of Armenian origin, his voice might just as well be mistaken for that of a seasoned Jamaican roots veteran and backed by Reuben Telford (organ, melodica, clavinet and percussion), wind section Gorka and Saioa Fernandez and percussionists Shanti Yalah and Dubby Ambassah, 'Ten Thousand Lions' sounds almost like a vintage roots/dub production. In his tracks Ras Teo also provides the listener with a number of solid history lessons. 'Falasha' is an ode to the "original Jews" from Ethiopia, with 'Mansa Musa' he tells the story of sultan or emperor Musa I, also known as the Lion of Mali, who ruled the Malian Empire from 1280 to 1337 and is still reknowned today because of the fabulous riches he managed to accumulate, and 'Bad Friday'recalls the so-called Coral Gardens incident in which, in April 1963, numerous Jamaican Rastafarians were arbitrarily arrested by the police and then tortured or even murdered. We already played the life out of this instant roots/dub classic and will gladly award it with a spot in our list of favorite reggae albums of 2019!