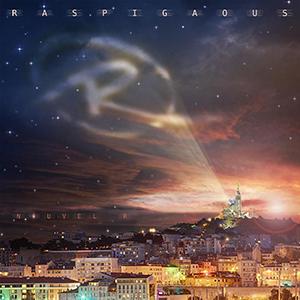 After all the releases in English, it's a real relief to bump into a French band wholeheartedly opting for the language of Molière. With 'Nouvel'R' (pronounced "nouvel air") Raspigaous, a band around singer-songwriter Lionel 'Léo' Achenza from Marseille, starts a new chapter.

The band was already formed in 1997, and was active until 2007. With three albums under their belts, 'Chaud Time' (1999), 'Chiens Des Quais' (2002) and finally 'Mauvaise Herbe' in 2005, Raspigaous had become a fixture in the French reggae circuit in just a few years. But even though the rest of the band members quit in 2007, Lionel remained in the grasp of the reggae virus. For a while Achenza successful pursued a solo career, resulting in the 2009 album 'Parce Que C'est Bon', but the urge to work with a full band eventually proved too strong, and with the support of The Handcart Band, Léo was able to breathe new life into Raspigaous that same year.

Because that band got more and more in demand as a backing band for international artists on tour in Europe, the Raspigaous revival was short-lived. Achenza was once again forced to focus on solo work, and in 2018 released 'J'suis Qu'un Gosse', his second solo album. However, after that release, Lionel handed Handcart Band keyboardist Denis 'Rastyron' Thery a series of unfinished songs, and he immediately showed enthusiasm. Together with the band, Léo took to Studio K in September of last year, and the result of those sessions can be heard on 'Nouvel'R', a gem of a French reggae album, seeing Léo pay homage to his American colleagues of Groundation with 'Le Son De La Basse', flirting with the sound of Steel Pulse in 'C'est Ça L'idée' or that of Bob Marley's 'Exodus' in 'Lêve-toi'.

But without a doubt the most striking song from the track list is 'Marsilia', an ode to his hometown and the inseparable link that port city developed with the Maghrebi culture from North-Africa over a melody taking the listener straight back to David Lean's film classic, 'Lawrence Of Arabia'.