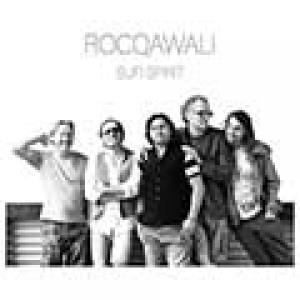 Like the band's name suggests, Rocqawali combines the best of Pakistani qawali and Western rock. Vocalist Ejaz Sher Ali can boast some excellent lineage, as he's the son of Ustad Sher Ali (apart from qawwali legend Nusrat Fateh Ali Khan, one of the biggest names in Pakistani qawwali-scene). 'Sufi Spirit' was recorded in a mere seven days at The Village Recording studio in Copenhagen, where the main focus on jamming and improvisation. In Islamic Sufi tradition, music is seen as a gateway to the divine; a spiritual tool to get closer to god. From that perspective, strict arrangements or locked melodic patterns are avoided in qawwali-tradition, and instinctive improvisation is preferred. Opener 'Ill Allah' is based on a poem by Dr. Allama Muhammad Iqbal, a poet, philosopher, politician and one of the founders of the Tehrik-e-Pakistan or Pakistan Movement (a political-religious movement from the first half of the twentieth century, aiming for a separate Muslim State, which ultimately led to the partition of India and Pakistan in 1947). 'Ali Aakhi', written by Wajid Ali Khan, is an ode to Hazrat Ali, son-in-law of the Prophet Muhammad, and the first imam in Shia islam. 'Sabh Tun' was also penned by that same author, and talks about the universality of the divine. 'Dhamaal' is somewhat different in nature, as it is an interpretation of the modern version of 'Dama Dam Mast Qalander', a composition by the master of Pakistani film music, Ashiq Hussain. Successful crossover between East and West.