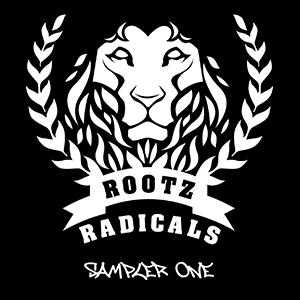 Waiting for their debut album to be released sometime in the spring of next year, Rootz Radicals are already presenting this 'Sampler One', a downloadable compilation free of charge featuring 13 of their already released singles. The five-piece band from Regensburg, Germany consists of Uno Jahma (vocals and arrangements), Chris Eastwood (guitar), multi-instrumentalist Thomas Eibl, bassist Henry Shell and drummer 'Tommy 'Stroke' Dread, but for some of the songs on this 'Sampler One' they joined forces with well-known names like Anthony B ('Let Jah Fire Burn'), Rebellion The Recaller ('Grounded') and Fitta Wari ('August Town Sound'). That being said, there's also room for new talent: in opener 'August Town Sound' you can hear the then barely twelve year old Zion, a prodigy guitarist Chris Eastwood bumped into at the gates of the University of the West Indies, where he studied for a long time (in the meantime the guy could also be heard in the intro of DJ Khaled's 'Holy Mountain'). Stylistically Rootz Radicals explore everything from rocksteady (ganja tune 'Fresh Weed', over a reworking of 'All I Have To Do Is Dream' by the Everly Brothers), over new roots to dancehall and even some afrobeats ('Bad Government' feat. UCee and Fredie Wize) and rock ('Way We All Come From'). Our personal favorites: The up-tempo 'Gal Weh In Deh' with Thomas Eibl's flute in a leading role, 'Lost Paradise' and its dub counterpart 'Dub Outta Den' again thanks to Thomas Eibl's contribution, this time on sax, and 'Let Jah fire Burn' and 'Grounded' the aforementioned combination tunes with Anthony B and Rebellion The Recaller (also check out the instrumental version of that last song, in which Chris Eibl alternates between saxophone, keyboard and melodica). Solid German reggae band to keep an eye on!