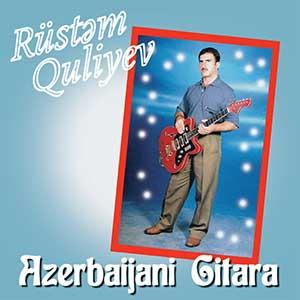 After trips to Madagascar, Colombia, São Tomé & Principe and Haiti, this time Les Disques Bongo Joe heads east for a compilation of the work of Rüstǝm Quliyev, nicknamed the King of the Azerbaijani Guitar.

Even though Rüstǝm is certainly one of the pioneers of Azeri guitar playing, the instrument was truly popularized in Azerbaijan by Rafiq Hüseynow aka Rǝmiş. Rǝmiş' technique, tuning his guitar in quarter tones to match local Azeri music, sounded radically different from that of European and American contemporaries and would become the inspiration for a whole generation of Azeri musicians, including a young Rüstǝm Quliyev.

Rüstǝm was born in Kosalar, a village in the disputed Armenian enclave Nagorno-Karabakh, and in his childhood first learned to play tar, an Azerbaijani long-necked lute, and saz, before finally discovering the instrument that would determine the rest of his life. In the early nineteen nineties, Quliyev moved to the Azeri capital Baku where he soon became a welcome guest at weddings and on television shows, releasing numerous music cassettes in the proces.

What distinguishes Quliyev from his colleagues and contemporaries is the fact that he constantly incorporated new influences into his music (after a brief fight against lung cancer, Rüstǝm passed away in 2005). When watching movies, he'd always listen attentively to the soundtracks, looking for interesting melody lines he could play on his guitar. A nice example from the track list is 'Tancor Disco', Quliyev's adaptation of 'Jimmy Jimmy Aaja', a song from the Bollywood movie 'Disco Dancer' (Babbar Subhash, 1982).

In addition, Rüstǝm wasn't afraid to look beyond Azerbaijan's frontiers, incorporating influences from Turkish, Iranian ('Iran Teraneleri', 'Fars Musiqisiare') and Afghani ('Әfqan Musiqisi') musical traditions into his work. But, of course, Azeri musical culture remains the foundation, as can be heard in 'Yanıq Kərəmi' or 'Baş Saritel', both groovy reinterpretations of classical saz songs from the aşic tradition, and 'Neyçün Gəlməz', which in turn is based on mugham tradition.

At the very least, an intriguing look into the musical traditions of a country we rarely, if ever, hear of!