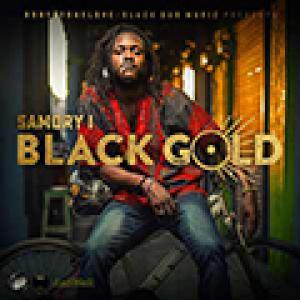 For his long player debut Samory I (real name Samory Tour Fraser), hailing from Kencot in Kingston, joined forces with Rory 'Stone Love' Gilligan, and where yours truly is concerned he couldn't have made a better choice! The result is 'Black Gold', a title referring to a track on the album in which Samory I is mesmerized by a black beauty at a dance, but which you may also consider a reference to the quality of the songs on this album. In the track list of course the already well-known 'Rasta Nuh Gangsta', a response to the negative connotations many people still hold about Rastafari. In 'Suit & Tie', Samory I sings: "I know the devil would come for I in a suit and tie!"; a statement we can certainly sympathize with. With 'Is It Because I'm Black' Samory gives a truly magnificent rendition of the soul classic by Syl Johnson, a song that was immortalized in reggae by Ken Boothe. And the attentive listener will undoubtedly recognize more things on 'Black Gold': 'Rastaman' is a revamp of 'If I Was A Carpenter', a song written by Tim Hardin, but best known from versions by Johnny Cash and The Four Tops, 'Fear Of Jah' is a version of 'Mammy Blue' (written by Hubert Giraud, and a hit in the French version for Nicoletta and Joël Daydé, and in the English translation for The Pop-Tops), and for 'Jah Power' Rory Stone Love seems to have drawn inspiration from The Congos' 'Fisherman'. Gilligan also provided a number of the tracks with an excellent dub outro, featuring an excellent horn section: Dean Fraser's sax in 'There Is A Spirit' or 'Fear Of Jah', Nambo Robinson, once again proving how much we're going to miss him, in 'Rasta Nuh Gansta' and 'Weed', Sheldon Bernard's mesmerizing flute in closing track 'Rastaman', and Everal Stingwray's trumpet). Even though both Chronixx ('Chronology') and Damian Marley ('Stony Hill') will undoubtedly draw most of the reggae crowd's attention in the coming weeks, we dare to put forward that with 'Black Gold', Samory I and Rory Stone Love have produced an equally strong release. Rock solid debut effort!