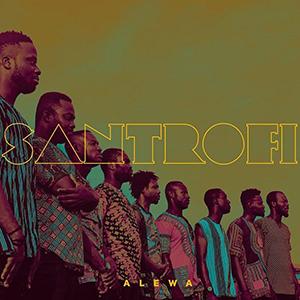 Santrofi is a new eight-piece Ghanaian highlife collective founded by Kwashibu Area Band bassist Emmanuel Ofori, who with this project wants to revive the traditional Ghanaian highlife tradition in all its forms - from the fast dance-guitar highlife of the nineteen seventies over highlife funk to the polyrhythmic beats that would eventually provide the inspiration for what later became afrobeat. In Akan mythology, Santrofi is a rare bird characterized by its brightly colored feathers and four wings. According to legend, the animal was so unique that it was forbidden to hunt it. Catching the bird would cause a lot of misfortune, but if you somehow manage to spot it in nature, happiness and opulence are guaranteed. Album title and title song 'Alewa' refer to a popular black and white striped Ghanaian delicacy and symbolize the need to acknowledge, accept, tolerate and embrace racial diversity in order to build a world in love and unity; a more then crucial message in this period of racial antagonism! The pan-African dream of one large unified African continent is also still alive and kicking with these young musicians, as they prove with 'Africa' for which they used an audio fragment from a 1958 speech by prominent pan-African leader and Ghanaian independence fighter Kwame Nkrumah. Santrofi's music may sound festive and extremely danceable, but make no mistake, these guys take what they do very seriously, and in 'Adwuma' (Akan for 'work') urge others to do the same. Excellent Ghanaian production with a lot of respect for the past but with their noses firmly pointed towards the future.