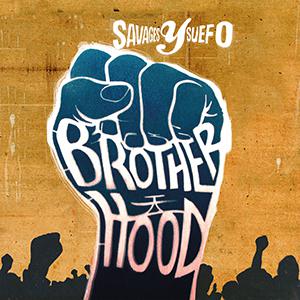 Who still remembers Hungarian producer-duo Savages Y Suefo (Nándor Kürtössy and Sándor Lakatos)? In 2012, when the Balkan hype was still at its peak, they created a highly infectious cross-over album called 'World-Style', which seamlessly merged genres like reggae, swing, electro, and, of course, gypsy music. This successor sounds quite different. The eclecticism has remained, but the Balkan influences have made way for electro-blues, doowop, dub-ska and downtempo-funk. It makes 'Brotherhood' into somewhat of an odd one out on these pages, but that surely doesn't make it any less of an infectious album.

'Brotherhood' opens with its title track, for which the duo collaborated with Pannonia Allstars Ska Orchestra front man Kristof Tóth aka Lord Panamo or KRSA, and in the intro of that song we hear: "There's only one way for revolution to succeed, and that is by creating brotherhood!". No idea who is behind this quote, but it immediately sets the tone for the rest of the largely socio-politically inspired lyrics on this album. That being said, we were more taken with 'Pass It On', KRSA's other contribution on 'Brotherhood': pure reggae and a duet with Hungarian singer Bogár, friend of the house of Savages Y Suefo). Apart from KRSA, fellow countrymen like Fedora, a well-known female MC in the Hungarian bass music scene, Bryant Goodman, front man of downtempo-funk band Mystical Plants, were also on the guest list, and Savages Y Suefo invited a number of international guests as well.

Vocalist/trombonist Ashley Slater (Freak Power), signed for no less than three songs in the track list, with 'People Kill People', a successful dub-ska cover of 'Guns & People', a cult classic by French film score composer Eric Serra from the soundtrack of 'Subway' (a 1985 film by reviled French director Luc Besson), is probably the most striking. And then there are British singer, MC and producer M3NSA, and Denise M'Baye, MC and singer with German Mo'Horizons, who can be heard here in 'Wings', a duet with M3NSA and reggae song 'All My Life Is In This Bag'. Savages Y Suefo did not invite a vocal guest for 'All Is Blues', the final note on 'Brotherhood', but just like in the title track, the tune also starts with a quote, this time by American blues and swing jazz singer Jimmy Rushing: "Anytime a person can play the blues, he has a soul and he has a "lift" to play anything else he wants to play. It's sort of like the base.".