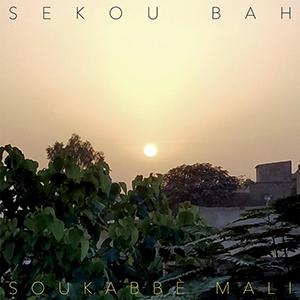 Sekou Bah, hailing from Bandiagara in Mali's central Dogon region, can easily be called a musical prodigy. Self-taught, he learned to play the guitar at a very young age and joined the local Nangabanou Jazz orchestra at the age of eleven. Age eighteen Sekou left Mali to further his musical education in Guinea, Senegal and Gambia. After that, things gained momentum fast. Bah attracted the attention of music legend Salif Keita and for the next three years became his trusted guitar and bass player. Sekou then joined Oumou Sangare, and since 2014 has been at the side of Fatoumata Diawara. But now the time was ripe for a solo album. Soukabbè Mali' ("the children of Mali") certainly isn't a world-shaking album, especially not for those already familiar with the Malian music scene, but from the energetic opener 'Dogon Oulon', an ode to the rich cultural heritage of the Dogon, you can hear that there's a true craftsman at work. In the more intimate 'Kalan Ko', for which Sekou received some vocal assistance from rapper Master Soumy, Bah talks about the failing Malian education system, or how Africa and Europe can sometimes be very alike, and he shares a wise life lesson in 'Adamadenw': we're all people, let's stop pointing fingers at each other. With title track 'Soukabbè Mali', Sekou Bah tries to prevent his compatriots from leaving their country for a life abroad that may be even more difficult and dangerous. 'Nourou Chi Rory' could be translated as "money doesn't buy happiness", and in the instrumental 'Planette', Bah gets to show his virtuosity on the guitar. Extremely solid debut by a seasoned Malian artist.