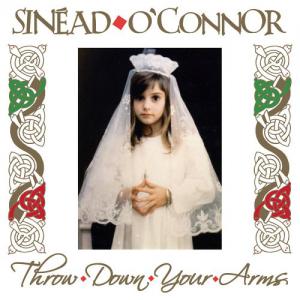 Sinead O'Connor goes reggae? Correction: Sinead O'Connor goes Rasta! According to the liner notes accompanying 'Throw Down Your Arms', Sinead recorded the album as a tribute to Jamaican icons like Burning Spear, Lee Perry and Bob Marley, who, through their Rastafari inspired music, helped her face some tough moments. With Sly & Robbie and their Taxi Gang as backing band, this project could hardly go wrong and it's probably no coincidence that yours truly liked the bonus CD, with dub versions of the same tracks, just that little more? Even though reggae fans will be able to sing along to all the tracks on this album, 'Throw Down Your Arms' didn't exactly leave us with a reggae feeling. Sinead does not attempt to sound the least bit Jamaican and maybe that's a good thing. What remains is a sincere and beautiful tribute to reggae and Rastafari. Ten percent of the album proceeds will go to a relief fund for disadvantaged Rasta elders in Jamaica. What more can a roots reggae-loving Rastafarian wish for?