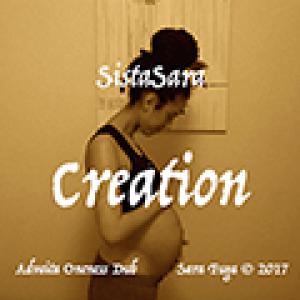 SistaSara is the alter ego of Italian-Nigerian producer and vocalist Sara Fuga. Sara was born in Venice, in 2003 moved to London, but these days lives and works in Oakland, California. Since 2012 Sara releases her albums on her own Advaita Oneness Dub label; initially still as free downloads under the creative commons principle, but since this year also as normal paying releases. Title 'Creation' and the cover photo of a pregnant Sara, were of course not chosen arbitrarily, as the singer dedicated this album to her newborn daughter Milla Luna. In addition, it's SistaSara's 10th solo album to date and the projects also marks her 11th year as a producer. Sara describes her music as an experimental psychedelic blend of dub, reggae and trip-hop, and as far as we're concerned feel free to add a touch of ambient to that mix. Trippy dub experience!