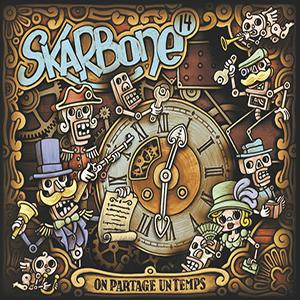 Tournai based band Skarbone 14 has been around since 2001 and with their solid mix of ska and punk with influences from klezmer, funk, hip-hop and more, in recent years have set many a festival stage ablaze. The name of the band is a contraction of ska and carbone 14 or Carbon-14, a radioactive isotope of carbon used for dating archaeological finds. 'On Partage Un Temps' is the band's sixth album to date, once again featuring a track list filled socio-critical songs like 'Un Vrai Métier', a cynical song about a boy who dreams of becoming a politician, but actually a sneer at figures like Bart Dewever and Charles Michel, and the similar 'Quand On A Que L'avoir', about the corruption of power, or 'La Loi Du Ballon', an indictment of the global money machine international football has become, or 'Inégal Est Le Vent', a song about the refugee crisis, prejudices and documents that divide people into those who have everything and are allowed everywhere, and those who get nothing. For 'Nei Beogo', capturing the impressions of a European visiting Burkina Faso (but at the same time an ode to Thomas Sankara), Skarbone 14 goes African, and in the same vein, but turning the tables, there's 'Exodes Ordinaires...', about an African arriving in the port of Antwerp with great expectations, only to see his dreams of becoming a professional footballer and being able to send some financial aid to his family at home, thwarted very quickly. Perhaps opener 'Tenace Est Notre Voix' sums up this Tournai based band best: "Tant qu'qu'on aura de la voix, ons ne baissera pas les bras! (loosely translated: "As long as we have a voice, we won't keep quiet!"). The album is beautifully illustrated in steampunk style by Alex Mayo, a young Tournai based illustrator and graphic artist with whom the band already joined forces for the third album in a row. Excellent Belgian ska-punk with an ideological and revolutionary stance.