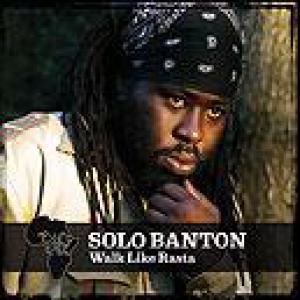 A reggae artist who calls himself after his favorite character from the Star Wars saga, it's different to say the least, but at the same time no more than a continuation of the movie tradition that deejays like Dillinger or Clint Eastwood already started years ago. With the video for his tune 'Walk Like Rasta', in which he criticizes the hypocritical attitude of some would-be-rasta-artists (the accompanying mockumentary featuring his creation Gangsta Ras, is hilarious), Solo Banton was responsible for a small YouTube hype in reggae circles about a year ago. Expectations were raised and yours truly eagerly looked forward to a full album. 'Walk Like Rasta', appearing on the relatively new Reality Shock Records, is no disappointment. Banton's songs are somewhat reminiscent of the work of YT, which is not a bad reference. It had been a long time since yours truly had listened so intensely to the lyrics of an album, heard what he wanted to hear and even believed it!