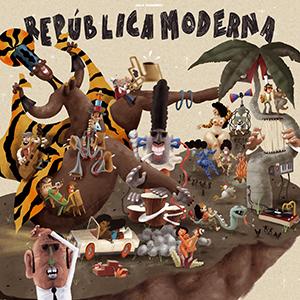 As the pseudonym suggests, Solo Moderna is the one-man project of Dutch musical Jack of all trades Bas Voorn, playing a whole range of instruments ranging from banjo and guitar to piano, various horns and even an amplified thumb piano, adding analogue synths, 8bit sound bites and rhythms from drum machines.

With 'Republica Moderna' Bas now proclaims his own republic offering space to an almost unlimited musical universe including Balkan grooves meets dembow (a subgenre evolved from Jamaican dancehall and Puerto Rican reggaeton, originally based on the riddim of the eponymous 1990 song by Shabba Ranks) in 'Escuchame Como Soy', over the cumbia of songs like 'La Bandolera' (a collaboration with Washington D.C. based band Empresarios) and 'Feliz Sintetizador', to the Afro-house of 'Sonido SID Africana', the congotronics of 'Republica De Chonta' and even the Jamaican mento of 'Mento Moderna'.