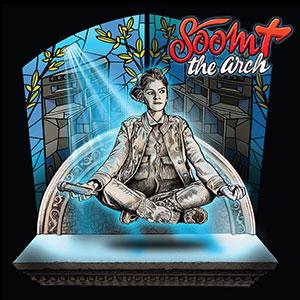 With 'The Arch', Scottish-Indian Sumati Bhardwaj, better known to the general public as Soom T, after a series of more eclectic albums, finally returns to the digital raggamuffin of her debut long player 'Ode 2 A Carrot' (Jahtari, 2010).

At the time, she did her first live sets alongside Erwan Dury aka DJ Kunta from Lyon inFrance. And even though he now resides in Myanmar (former Burma), he once again assisted Soom in the production of 'The Arch', which was recorded in collaboration with Lyon-based band Highly Seen (a trio consisting of Green Teddy - guitar, bass and arrangements, Daddy Green - drums, and JD - keyboards).

Soom's verbal acrobatics rattle on at such a high pace - respect due - that it's convenient to have the lyrics at hand.

In opener 'Original That's Me', she actually introduces herself, but the singer has been a devout Christian for some time now and doesn't hide that in her music, as illustrated in songs like 'World Be Better' ("My Lord, please have mercy on my soul so worn and thirsty, on my mouth that is so guilty and my eyes that have been worthy of the pits of hell so firey, I deserve for you to curse me. So let me get up early and beg you Lord for your mercy..."), 'Far From Home', in which she talks about her own conversion ("I was raised in a bad city, with some freaks hanging around with me, talking about war, the birds and bees, who would fly in the windy breeze. Slowly dying and the lands are emptied of people real wise like Jesus. Troubles in my head they start to shift me to a desert this is what I believe... I belong to the lord for the Lord I holler, the fallen call on Jehovah..."), the obvious 'Sold To The Devil' ("I've got the Lord locked tight upon my dial up - with ma style ruff. Upon a mic I bomb my mind up - like cyclops...") and 'Salute To The Boss' ("I'd been lost until found upon the road, by a stranger as holy as God... I salute to the boss. I remember when I (kiss) my cross, how to live a life and never get lost. He showed me the way across..."), or even "Likkle England", in which Soom uses the "Good Book" to try and save her countrymen from sin ("Good book cure everyone in England. I live in Scotland a little Indian. I'm gonna stop all them people sinning, and we'll win this war my people come in!").

Reggae for the Evangelical Broadcasting channel? Soom may be a bit too sharp-tongued for that, but even though this is clearly music with a Christian message, that doesn't make it any less catchy. Soom T has found the Lord, but if that results in this kind of records, we can only laud her conversion!