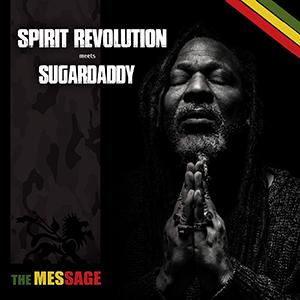 After backing a number of different artists in the past, Spirit Revolution, a band from the region of Colmar in northeastern France, released their debut album with 2011's 'Time Has Come', which was immediately named "révélation de l'année" ("revelation of the year") by Reggae.fr, already making the band dream of a successor. In the meantime, original vocalists Fyah Max and Natty Singa quit the band, so for 'The Message', the now four-piece band (Robin Schmitt - bass, Romain Pierré - keyboards, Arnaud Geschigkt - guitar and Vincent Pierré - drums) finally joined forces with William Martin aka Sugardaddy, a veteran from Antigua. From its founding in 2003, Spirit Revolution has always set itself the goal of trying to create an authentic Jamaican reggae sound, only using live instrumentation; something they absolutely succeeded in with 'The Message', an album that never seems to have the intention to color outside the lines, but just for that reason becomes almost a blueprint of a classic reggae album. All classic elements, going from socio-critical and Rastafarian inspired songs like opener 'What A Thing', the topical 'Everyday' or ital living anthem 'Man A Rasta', over a traditional mama-tune ('Mama'), and a love tune like 'Natural Woman', stylistically alternating between pure roots, nyahbinghi (title track 'The Message') and dub (closing track 'Mr. Dubman', a dub version of 'Mr. Bigman'). Only for breakup tune 'My King', Spirit Revolution invited an extra vocal guest in the form of LaRegina, a singer-songwriter from Freiburg, Germany, with whom the band also recorded the soon to be released single 'Appetite'. Classic reggae album of the sort you only come across when you go digging through your record collection!