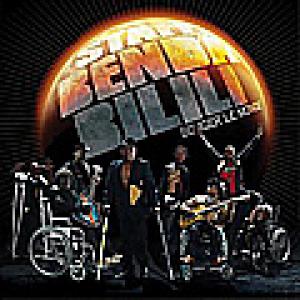 Many will have eagerly looked forward to the release of this second album by Staff Benda Bilili. The million-dollar question is of course whether the "handicapés" from Kinshasa have been able to preserve the magic of their first album. What is certain, is that since the recording of 'Très Trés Fort' much has changed. The band members no longer live on the street and the neglected zoo of the Congolese capital no longer served as the background location for the recording of this album. Instead Vincent Kenis set up shop at the Renapec studio, the place where Congolese legends like Franco, Tabu Ley or Papa Wemba came to record their successes. This results in 'Bouger Le Monde' sounding a lot cleaner than predecessor 'Très Très Fort', but rest assured, Staff Benda Bilili has managed to hold on to the typical vibe of their debut album, even though 'Bouger Le Monde' might have a bit more of a rock vibe going. Top track from the eleven songs counting track list is 'Kuluna/Gangs', a groovy song about the gangs of thieves that wander the streets of Kinshasa, a faith that also could have become the members of Staff Benda Bilili.