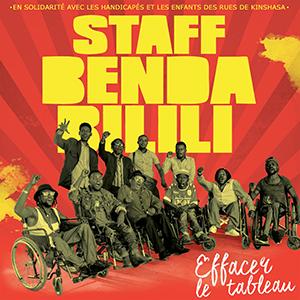 Who was expecting this? After almost endless internal quarrels about money and mismanagement, and the Mbongwana Star project for which band members Coco Ngambali and Théo Nzonza left the line-up of the band, after 8 years of silence, Staff Benda Bilili return with this more than aptly titled 'Effacer Le Tableau' ("start with a clean slate").

The line-up of the band has almost completely changed, but at the helm is still founder Ricky Likabu (demonstrating you should never underestimate the ever hopeful perseverance of the Congolese, just as they sing in 'Salongo': "Il n'y a rien pour rien, il faut travailler!").

For this album Staff Benda Bilili no longer worked with Vincent Kenis, but joined forces with French producer Jean Lamoot, resulting in a sound that sounds a little less experimental and more like a traditional Congolese production (opener 'Semba Bilokota', 'Salongo', 'Trois Décembre', 'Bolamu'...), and for 'Olio Anté' they even go reggae.

Most notably absent is the one-stringed satongé of Roger Landu, who is no longer part of the line-up of the band and is working on a solo career.

A large part of the band members of Staff Benda Bilili are polio-patients, and know all too well the often miserable conditions in which the disabled and street children in Congo have to survive. That's why the band will donate 10% of the proceeds of the sale of 'Effacer Le Tableau' and 30% of the proceeds of their upcoming tour, which is planned for 2020, to Karibu Kinshasa, an NGO dedicated to changing the fate of street children in Kinshasa and thanks to the cooperation with Staff Benda Bilili, will also focus more on disabled people in the future (see also the song 'ONG' in the track list).

All in all, the 14 new compositions on this album still incite to dance. With 'Bonne Année' Staff Benda Bilili wishes us all the best for the New Year, and we certainly wish them the same!