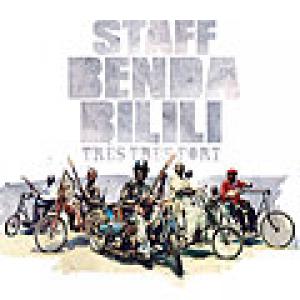 One can wonder where he keeps finding them, because after previously having surprised us with Konono N°1 and Kasaï Allstars, Vincent Kenis now introduces us to Staff Benda Bilili. The story behind this band reads like a film scenario. For many years now the meeting place for the "handicapés" ("disabled"), usually polio victims moving in, sometimes motorized, tricycles in the Congolese capital Kinshasa, has been the grounds of the zoological gardens. Exempt from paying taxes since the 1970s, the disabled usually make a living by transporting all kinds of stuff across the river dividing Kinshasa and Brazzaville. The bonus video clip 'Staff Benda Bilili: A Presentation' on 'Très Très Fort', in just a few minutes tells the story behind the band. Staff Benda Bilili stands for funky, groovy rumba and with their lyrics on everyday life in the capital they regard themselves as street journalists. Finally there's also the sound of the satongé, an instrument that is the invention of Roger, a street urchin who was adopted by the band members and soon grew into a true musical genius on his instrument that consists of no more than a tin can and a piece of cable! We are already convinced that this is one of the discoveries for 2009!