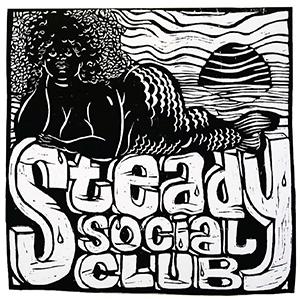 The immediate reason for the foundation of Steady Social Club was the production of the very first Polish rocksteady album; a mission in which they definitely succeeded with 'Take One'. The band is composed of veterans of the Polish ska-scene who already knew each other as members of Vespa ((Maciek Januchowski - guitar, keyboards, vocals, Bartlomiej Kościański - bass, guitar and keyboards, and Artur Grochowski - drums, percussion and keyboards), a well-known Polish ska-band. For the vocal work Ania Teliczan, Wioletta Baran and Boris Borowski (of Spartan Allstars) were invited to tag along. In addition, all tracks were recorded in analogue fashion on a 16-track Tascam MS-16 tape recorder and mixed in mono, each track being recorded in one take (hence album title 'Take One'). Even the cover illustration of the album was handcrafted, as it's a linocut by Katarzyna Pawlikowska. In the track list, we'd like to highlight two personal favorites: first 'Set Me Free', in which Wioletta Baran creates a Chrissie Hynde-like vibe, and secondly the more up-tempo 'Friend Or Foe', with Boris Borowski on vocals. Enjoyable Polish rocksteady-pioneering!