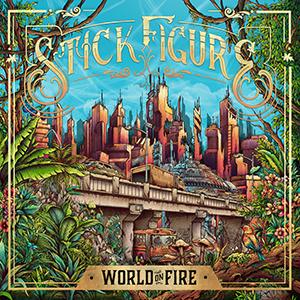 Even though we've become quite familiar with the American reggae scene, this 'World On Fire', already Stick Figure's seventh album, is our first introduction to this singer-songwriter from Duxbury in Massachusetts, who has been operating from San Diego in California for a long time now, and is extremely popular in his own country.

Live, Scott Woodruff is assisted by a real band, but as far as his albums are concerned, the multi-instrumentalist does just about everything himself, always accompanied by his faithful four-legged friend and mascot Cocoa of course. 'World On Fire' got a somewhat apocalyptic cover image, in which man and his creations have become remnants of the past, but fauna and flora flourish as never before. The image is the work of Juan Manuel and refers to the title of the album: every "wrong" decision we make as individuals, from eating a steak, to buying a few sneakers, to taking the plane to leave for your dream destination... It all starts to stir up the flames that slowly but surely consume the world.

You only have to look at titles like 'Life Is A Party', 'Whiskey Sun' ("Smoking makes the sun come up, whiskey makes the sun go down, and in between all the little things that don't mean much, we do a lot of standing around...") and 'Summertime' to realize that this isn't sufferer's music from the Kingston's ghettos, but pure Cali-reggae, where life is good and the green herb is abundant. But this is certainly not the "teenage reggae" Rebelution and other Californian bands have made their trademark, as Woodruff clearly knows how to write and compose a decent song.

The fact Scott also knows his classics, he proves with tracks like the aforementioned 'Life Is A Party', first featuring a revamp of the riddim to Black Uhuru's 'Solidarity', and then seamlessly blending into the Beatles classic 'Norwegian Wood' (in reggae circles better known as the Darker Shade Of Black riddim), and 'Cocoa De Rock' is a cover of Alpha Blondy's 'Cocody Rock', but in this case dedicated to Cocoa the Dog! For this album Stick Figure also invited a number of guests: in title track 'World On Fire' Woodruff shares vocals with Slightly Stoopid front man Kyle McDonald, for 'Whiskey Sun' Scott once again invited his buddy T.J. O'Neill (who also appeared on 2012's 'Burial Ground'), and 'Summertime' is a duet with blues, soul and folk singer Citizen Cope.