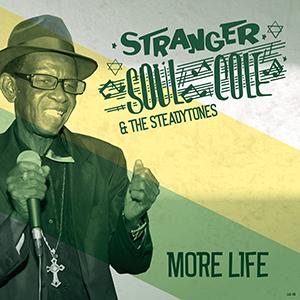 In 2009 Jamaican veteran Stranger Cole was invited to be the voice over for the documentary 'Rocksteady: The Roots Of Reggae', but his last musical achievement, the 'Morning Train', produced by Jah Shaka, already dates back to 2006. Together with German band The SteadyTones (who also shared the stage with Keith & Tex, Doreen Shaffer and Dawn Penn), Stranger now presents this 6 track 'More Life' EP. Opener 'Hide It' still tastes a bit like mento, but the other five tracks are pure and sweet rocksteady, seemingly plucked from that all too short period between 1966 and 1968. All originals as well, except 'Tell Me Darling', a rocksteady makeover of the eponymous song by Jackie Edwards from 1960, at the time produced by Chris Blackwell. Wilburn Theodore Cole might have passed the age of retirement already, but he isn't done with music by a long shot, 'More Life'!