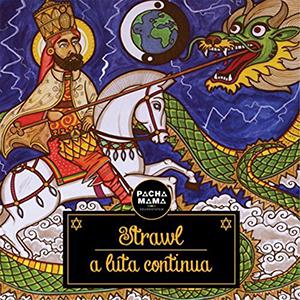 For many years now, Saint Eustachian Strawl (Curtis Arnaud) has been a stalwart of the Dutch reggae scene, and for 'A Luta Continua' (loosely translated: "the fight continues", the battle cry of Samora Machel, leader of FRELIMO, or Frente de Libertação de Moçambique, during the Mozambican war for independence) he joined forces with Pacha Mama, a sound system crew from Den Bosch, with this album also celebrating the first release on their Pacha Mama Music label. In the intro of the album you'll hear the voice of Rastafari elder Mortimer Planno (an excerpt from 'Roaring Lion: The Rise Of Rastafari', a 2002 documentary by Ishmahil Blagrove) also using Machel's battle cry. All riddims on 'A Luta Continua' are the work of Cartes Selah, who also played virtually all of the instruments (assisted by Wouter Ebben and Sharen Singh on bass, Cas van Son on guitar, Rootsman Saxophone on sax and Rein de Kok on trumpet). Even though we couldn't rid ourselves of the impression that with this release Pacha Mama are mainly targeting a trusted sound system audience, we didn't find any disappointments in the track list (our personal favorites being: the dubby repeater/keteh  percussion driven 'Backbiters', the up-tempo steppers tune 'Bun Dun Rome', and closing track 'Zion Gates'). Moreover, if, like yours truly, you like solid roots with some UK steppers influences, 'A Luta Continua' will definitely be up your alley. The only thing that slightly surprised us about this release, is the fact Pacha Mama omitted to include a solid dub version of at least one of the songs, but perhaps there a full-fledged dub version of the album is still in the works? In any case, respect due!