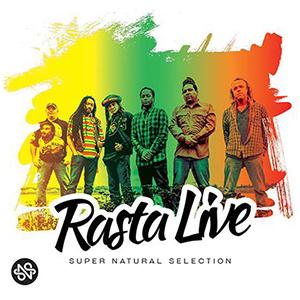 Super Natural Selection is a Dutch band with members from Arnhem, Nijmegen and Wageningen, and has already been active since 2002. For 'Rasta Live', their third long-player, finally taking the band back to the studio after more than five years, Super Natural Selection joined forces with producer Rekesh Dukaloo and opted to record all songs in 432 Hz, the so-called "frequency of the universe" (in her book 'Von Intervallen, Tonleitern, Tönen und dem Kammerton', German-American violinist Maria Renold presented 432 Hz as an ideal frequency, which in the book she also relates to various numerical values occurring in the universe and in nature). The six-piece band has a Surinamese core, so on 'Rasta Live' you'll find songs in English as well as in Sranantongo. In the latter category we found 'Memre Deng Dey', loosely translated: "Remember those days!" and a melancholic reverie by front man Prince Naffy Reemnet about the carefree years he spent in Suriname, and 'Deng Krey' or "They're Crying", in which Super Natural Selection regrets the fate of the multitude of children suffering worldwide because of wrong decisions made by adults. From the remaining eight English songs, we'd definitely recommend opener and title track 'Rasta Live', a track that sounds as simple as it is contagious and that will undoubtedly make you sing along after a few lines. Apart from that there's ganja tune 'Burning' and the nearly six-minute-long closing track 'Jah Love' allowing guitarist Bart Schouten to pull out all the stops. Super Natural Selection describes this album as: "Strictly roots, giving you a natural high", and there's not much we can add to that.