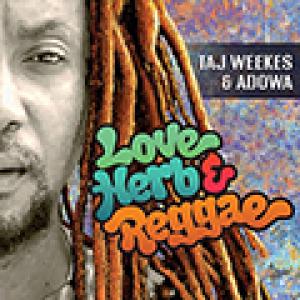 With 'Love, Herb & Reggae', the title of his new album, Taj Weekes offers an alternative to the old adagio "sex, drugs & rock and roll". Yours truly got to know Weekes through his not entirely convincing 2011 album 'A Waterlogged Soul Kitchen', but live ('Pariah In Transit', 2013) he did manage to convince and 'Love, Herb & Reggae' falls somewhere in between. It remains striking how much Weekes' voice resembles that of his German colleague Sebastian Sturm, something we already noticed on his past records as well. A good reggae album deserves at least one good ganja tune and the message of 'The Laws' - "The laws against marijuana and the force against marijuana have done more harm than marijuana has ever done to anyone!" - is certainly one we can get behind. Of the same order is the anti-gun statement 'Bullet For A Gun' and with 'Life In The Red' Weekes describes a situation which for many threatens to become a daily reality. Taj remains militant and on 'Love, Herb & Reggae' he calls for resistance at least twice ('Rebels To The Street', 'Rebel'). Weekes has been a New York resident for a while now, but the fact he duly misses his native Saint Lucia occasionally is proven by 'St Lucia On My Mind'. The better easy listening reggae.