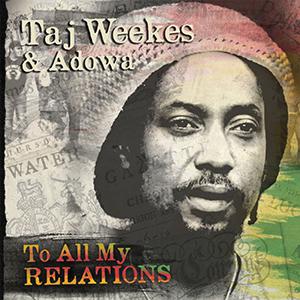 American reggae artist of Saint Lucian descent Taj Weekes describes 'To All My Relations' as: "...a socio-political journey of self-discovery.", and we couldn't agree more. The track list includes songs like 'Narcissist', 'Son Of A Bitch', both titles leaving little to the imagination, in which the singer fulminates against the policies and image of the current president of the United States. A somewhat cynical but justified criticism is '41 Shots', an ode to Guinean migrant Amadou Diallo who in 1999 was shot no less than 41 times by the NYPD, who mistakenly (!) saw him as a wanted suspect in a rape case: "41 shots to kill Diallo, 50 odd shots took Bell's tomorrow, only 2 to bring a lion down, we must be the toughest beast in town!". You won't hear us claim 'To All My Relations' falls short musically, as Taj incorporated everything from nyahbinghi (opener 'You & I'), over one drop ('All Tears Flow', 'What Do You Believe In') and ska ('One Little Spark') to even Indian pow wow drumming for 'Standing Rock' (musical encouragement for the activists protesting against the construction of the Dakota Access Pipeline that would partly run through the Lakota's Standing Rock reserve, in 2015 still vetoed by President Barack Obama, but in 2017 reapproved by Trump) and a single acoustic guitar in the bolero-like closing track 'Bullet From A Gun', but this is just one of those albums where it's all about the lyrics, perfectly summarized in opener 'You & I': "The world outside your window isn't fixed, and you and I have got to coexist.". With 'To All My Relations'Taj Weekes delivers his best album to date!