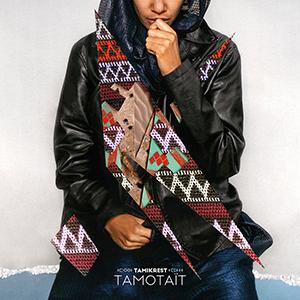 For this new Tamikrest album we'd just like to start with the title: 'Tamotaït' is Tamasheq for "hope for a positive change", something we all clearly yearn for after the entire COVID-19 pandemic and the recent global wave of anti-racist protest following the violent death of George Floyd during an arrest by the police in the American city of Minneapolis. However, with that title, the members of Tamikrest mainly refer to the situation of the Tuareg people.

In recent years the north of Mali has been plagued by Islamic fundamentalist-inspired violence and the Kel Tamasheq continue to dream of Azawad, their own peaceful Tuareg nation. At the moment, however, this is no more than a distant dream, and the members of Tamikrest haven't even lived and worked in Kidal, the town in northeastern Mali where it all started for the band, since 2007.

The message from the title also continues in the songs on 'Tamotaït'. Percussionist and vocalist Aghlaly Ag Mohamedine describes 'Amzagh' as: "...a song that describes the people of today and reflects about the people of the future; what are we doing right now and how this will influence the future...", and in 'As Sastnan Hidjan' Tamikrest preaches revolution: "It's about revolution, a revolution in Tamasheq culture. We want to fight for our culture and tradition. We are not taking the oppression for granted. We stand and we fight."

This time Tamikrest also invited a number of guest musicians. For the intimate 'Timtarin', Tamikrest invited Moroccan Hindi Zahra: "We invited her to play with us at one of our concerts in Brussels. We hadn't rehearsed; she just came on stage and it all happened very naturally. We really liked what she brought to our songs and invited her to come and sing on other dates. Each time, we managed to create something very natural and spontaneous. She has a remarkable voice and she's a very good improviser. It seemed natural to us for her to sing on the album. We recorded without any rehearsal, and the first take was the right one.".

An even bigger surprise is closing track 'Tabsit', for which Tamikrest collaborated with Atsushi Sakta and Oki Kano, two Japanese masters of traditional instruments like the shamisen (the Japanese answer to the banjo) and the five-string tonkori. Tamikrest front man Ousmane Ag Mossa says he became intrigued by traditional Japanese music culture after a Japanese tour: "I decided to go back, to know more about the culture and music. During my visit, I composed some songs on one of the remote islands of Japan. And since the songwriting of this album started in the desert and ended on the islands of Japan, we believed that it was a good idea to reflect this on the album as well.".

For 'Tamotaït', Tamikrest finally called on producer David Odlum, who infused the album with a bit of a rock vibe ('Anha Achal Wad Namda'). Tamikrest keeps on evolving and looking for new horizons without losing sight of their own roots, making them one of the most interesting Tuareg bands of the moment.