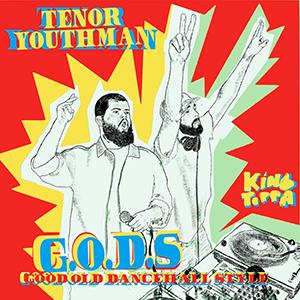 Yours truly already crossed paths with Russian MC/vocalist Tenor Youthman on releases by DJ Vadim, Dreadsquad and Alpha Steppa, but 'G.O.D.S.', a collaborative effort with German producer and riddim builder King Toppa, is the first time we're presented with a full-fledged album by his hand. The title of the album is an acronym, which actually stands for Good Old Dancehall Style, and can be considered as a tribute to veterans from early dancehall like Tenor Saw, Nitty Gritty and Eek-A-Mouse. Youthman has perfectly mastered the style and vocal skills of the aforementioned artists and the digital riddims of King Toppa also seem to stem from the nineteen eighties. The track list is a mix of original tracks like opener 'Chance Fi Dance', the highly infectious ganja tune 'Pass The Chalice' or the great 'Dollar', followed by a perhaps even better sounding dub version 'Dollar General Dub', but on an album like this a few nods to the originators are a must. 'Lion Mi Lion Vip' is clearly inspired by Eek-A-Mouse's 'Anarexol' and 'Raggamuffin Kids' is based on Junior Murvin's 'Police & Thieves' or rather the digital counterpart 'Muggers In The Streets'. But Youthman also draws inspiration from outside the reggae genre: Tenor revamped The Doors' 'Light My Fire' and in 'Chance Fi Dance' you can hear fragments from Toni Braxton's 'Unbreak My Heart'. Party album from beginning to end; rewind and come again Tenor Youthman!