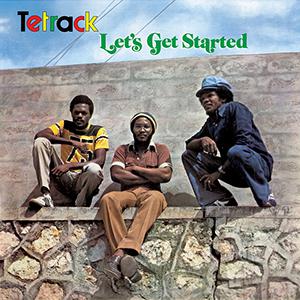 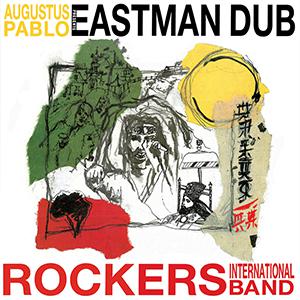 'Let's Get Started' was Tetrack's Augustus Pablo produced long-player debut. The somewhat forgotten Jamaican vocal trio consisted of Carlton Hines, Dave Harvey and Paul Mangaroo. Carlton, Dave and Paul grew up in the same neighborhood in Kingston and also were school buddies as well, or as Carlton Hines summarizes: "I was born in Franklin Town, Kingston in July 1951 and grew up generally in East Kingston. You have some good singers come out of the area... The Melodians used to live up the road... Max Romeo... The Gaylads... My dad was the first person I knew who wrote songs, but he didn't realise that I would develop the craft. My mum and my sisters used to sing in Church choirs, but I was not involved in any of this. Dave Harvey and Paul Mangaroo grew up in the Saunders Lane area of East Kingston at the foot of Wareika Hill. We first met when I was nine or ten. We were neighbors; I got used to Rollington Town Primary School and Paul also got used there. Dave went to Central Branch Primary School on Slipe Pen Road where one of his classmates was the great Dennis Brown!". Personally, the name Tetrack always reminded me of Tetra Pak, a Swedish brand of drink cartons, but that has nothing to do with the band's name, as opposite to Dave lived a certain Owen Archer who ran his own sound system, called Tetrack Hi-Fi. The sound system turned out to be the ideal music university for the three friends, and when they decided to form a band themselves, it seemed only logical to choose Tetrack as its name: "We had Tetrack Hi-Fi, run by Owen Archer, located right accross the street from Dave's house and it became our musical schoolroom. We were influenced by all the groups and artists and we'd harmonize to records by The Heptones, The Melodians, The Paragons, The Gaylads... these guys used to sing!". The trio started rehearsing and in 1974, thanks to Denzil Gooden, a mutual friend, got the chance to audition for Augustus Pablo. Pablo feels an immediate chemistry with the Tetrack guys and before they know it, they have recorded five excellent 7inch singles together ('I'm Not Satisfied', 'Let's Get Together', a new version of Johnny & The Attractions' rocksteady hit they record in Lee Perry's Black Ark, 'Let's Get Started', 'Only Jah Jah Know' (also an early Greensleeves 7inch from 1978) and 'Isn't It Time').

In 1980 Pablo decides to bundle some of those tracks with some newer material for what eventually would become this 'Let's Get Started' album. In Jamaica, the long player appears on Pablo's Message label, but is a commercial flop. However, when in 1989 Greensleeves decided to rerelease and distribute the album in Europe, 'Let's Get Started' is praised by critics and fans alike. Carlton Hines: "I don't recall these songs being sold to any extent in Jamaica and Tetrack was better known in London than in Kingston. One of the main reasons was that being artists was not really our chosen path... it was more of a hobby for us and we were fortunate enough to be able to survive outside of music. I had studied economics at the University of the West Indies at Mona and was working in the Central Bank of Jamaica in Kingston, Paul Mangaroo was a laboratory technician in a factory that made soap and edible oil, and Dave Harvey was a mechanical engineer at an industrial plant.". For the cover photo of 'Let's Get Started', Tetrack drew inspiration from 'On Top', a Studio One classic by their favorite trio The Heptones.

At the beginning of the nineteen eighties, the rise of the digital dance hall caused a declining interest in vocal roots trios like Tetrack. With the ominously titled 'Trouble', in 1983 they still release a second Gussie Clarke produced album, but after that the band falls apart. Hines however continues to work as a lyricist for Gussie Clarke's Music Works, where he's responsible for mega hits like Gregory Isaacs' 'Rumours' and J.C. Lodge's 'Telephone Love' and wrote most of the songs on the Mighty Diamonds' 'Real Enemy' album and Gregory's 'Private Beach Party'. Carlton Hines: "Writing is like second nature... I see myself as a songwriter-singer not a singer-songwriter. I sing to write, not write to sing. If I could do only one thing in music it would be writing... seeing you songs come together is like watching a child growing. You have to be mindful of what you record, because once you've done it and it's out there it's like an indelible mark.". One thing is for sure, Tetrack has certainly left that indelible stamp behind with 'Let's Get Started'.

As the cherry on the cake, Greensleeves also added 'Eastman Dub' to this re-edition of 'Let's Get Started', a 1988 dub album for which August Pablo reworked seven Tetrack riddims. As re-issues go they don't come better than this!