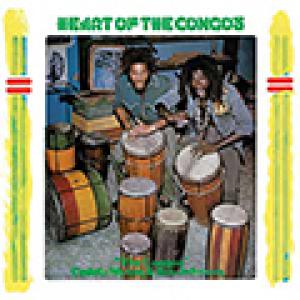 'Two Sevens Clash' isn't the only roots classic celebrating its 40th anniversary this year, the same goes for Lee Perry's masterpiece 'Heart Of The Congos'. The Congos' debut album was originally scheduled to appear on Chris Blackwell's Island Records label of Chris Blackwell, but that deal fell through last minute - opinions about the reason why differ - so Perry decided to release the album in limited edition on his own Black Ark label. Those first pressings, some with hand-painted yellow stripes (the work of Jah Wise, reproduced for this reissue), have meanwhile become highly sought after collector's items. 'Heart Of The Congos' got its first international release in 1980, when the album was almost simultaneously released on the French Jah Live label and Go Feet Records from the UK (the label of 2-Tone band The Beat) was issued. Eventually 'Heart Of The Congos' ended up in the catalog of VP Records, but the most inspired reissue appeared on Steve Barrow's Blood and Fire label. And now there's this three-part '40th Anniversary Edition', for which, in addition to the songs that were already featured on the Blood and Fire edition, the previously unreleased track 'Don't Blame It On I' and, for the real purists among you, a disc containing the original Black Ark mixes, were added. And, credit where credit's due, Roy Cousins & The Royals, The Meditations and The Heptones now also finally get some official recognition for the contribution they made to this timeless classic.