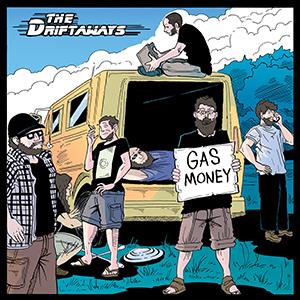 The Driftaways are a band from St. Louis, Missouri, the so-called Midwest of the United States. The band started out as a trio in 2011, but in recent years has expanded into a full-fledged six-piece outfit, present their second album with 'Gas Money'. The Driftaways describe their sound as a mix of ska, reggae and dub, supplemented with influences from blues rock. The album starts with 'Perdido', an ambient-like intro in which even the bleeps of a sonar can be heard, but that smoothly blends into 'Lost In My Mind', a laidback reggae song in which the excellent horn section of the band stands out for the first time (Sean Meyers - trombone/vocals, Jimmy Pecher - saxophone/flute and Zaq Nunley - saxophone/vocals), and guitarist and lead vocalist Dane Wells gets plenty of space to do his thing as well. The tempo picks up pace for 'At The Gates', but the band really goes all out for 'Who Buy The Bomb', solid ska-punk. The band goes conscious roots again with 'Live Like The Rasta', over a riddim in which flute and melodica provide a different vibe. The fact they also know how to build a good dub track is proven with 'Gold Dub', once more with a leading role for the band's horn section. 'Can't Stop Me Now' is in the same vein as the aforementioned 'Lost In My Mind', and our personal favorite on 'Gas Money' is 'We Didn't Mind', an indictment of Western aloofness (as long as we don't experience it ourselves or see it with our own eyes, the suffering in the world seems to affect us less and less - see for example the current famine in Yemen) in which saxophonist Jim Pecher can go all out. The album ends with 'We The People', another ska-punk tune in which the band calls on the people to stop swallowing the bullshit the media and politicians keep feeding us. Excellent long player by this American band, musically slightly more convincing than lyrically.