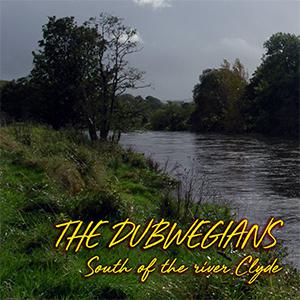 With The Dubwegians' 'South Of The River Clyde', Dub-O-Phonic is re-releasing an EP by the Scottish duo Gary Lamont and Richy Clark, which originally saw the light back in 2011, but unjustly suffered from a lack of attention. The two friends initially wanted to start a real dub band, but when that idea didn't get off the ground, they decided to continue their passion as a duo: "We tried to capture the energy of a live band. In the absence of a drummer, it was a struggle for us to use software, trying to capture the original warmth of analogue dub. It was a real learning experience; listening and trying to emulate these dub masterpieces. We have never done dub producing before and were slowly realizing some of the techniques used." The title of the EP and the name of the band are of course references to the city of Glasgow in Scotland, but 'South Of The River Clyde' is also a nod to Augustus Pablo's legendary 'East Of The River Nile' and it's also a reworking of his 'Rockers Rock' which opens the 5 track EP. The rest of the tracklist is made up by 'Creator Dub', a version of 'You Don't Love Me (No No No No)', 'South Side Dub Skanking', a dub version of Althea & Donna's 'Uptown Top Ranking', 'Sun Is Shining Dub', the dub counterpart to Bob Marley's 'Sun Is Shining', and finally 'Too Hot Dub', a version of Prince Buster's 'Too Hot' (also known in the version by The Specials).